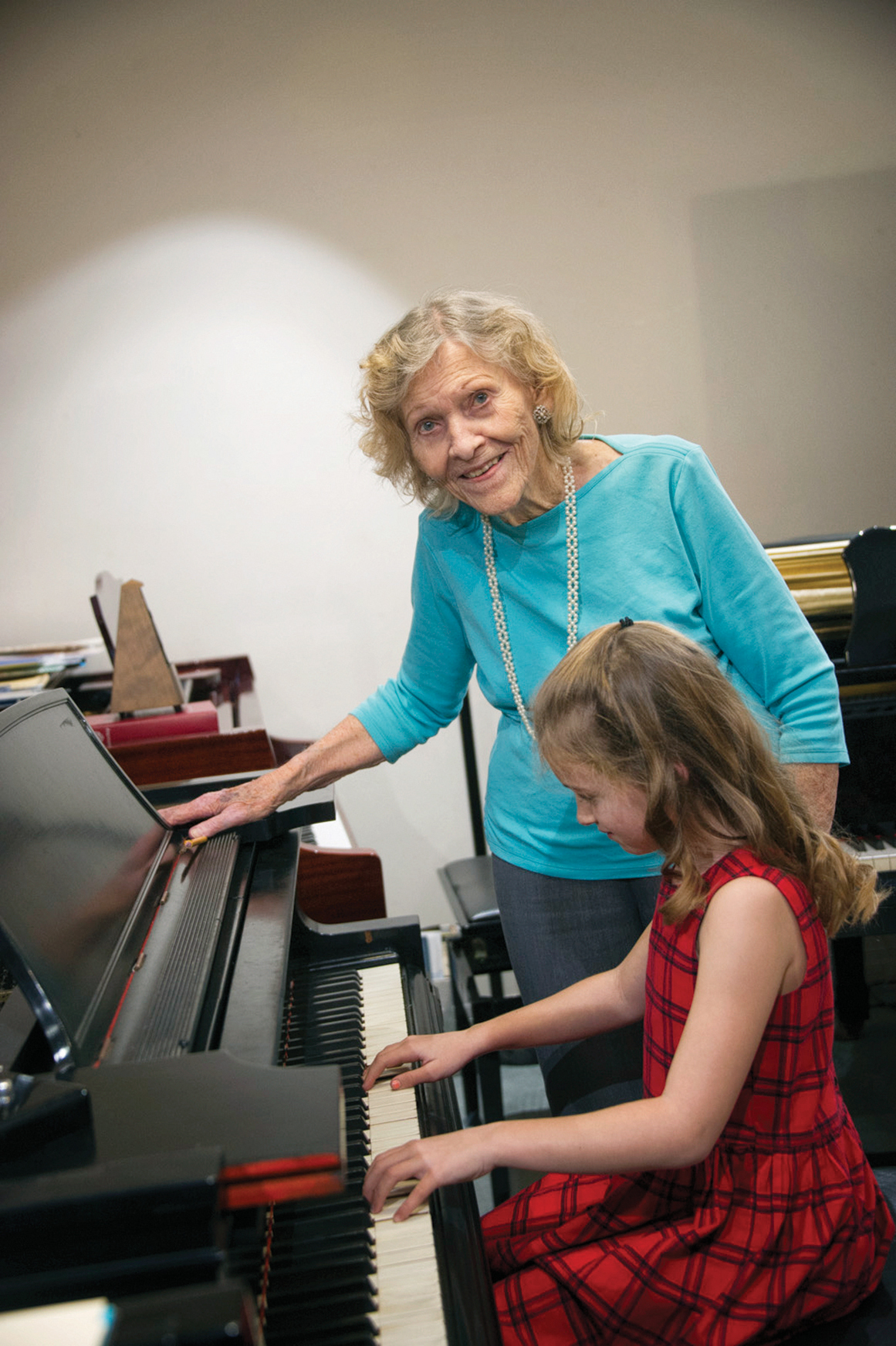 Merle Valdez continues to change not only the lives of the countless piano students she teaches, but also the lives of VU students who benefit from her generous aid.

As a young girl born in the 1920’s, growing up in a world that was ever changing, Murella Schliebe found her solace in music. She grew up in Santa Ana, California and attended an Assemblies of God church in town. The oldest of eight children, her mother passed away when Murella was just 19 years old, and soon after that tragedy, she felt like she needed a new start.

That start came at Southern California Bible College (SCBC)—a small bible school in Pasadena that would later be known as Vanguard University in Costa Mesa.

Murella Schliebe, now known by her professional name of Merle Valdez, followed her passion and studied music at SCBC in the 1940’s. In her music classes, she sat alongside a young man by the name of Ralph Carmichael.

“My music classes were always so interesting to me, and Ralph made them even more interesting,” recalls Valdez of her piano and music theory classes.

Because of her family’s financial hardship, Valdez only attended one year at SCBC, but that did not stop her from striving to become the best musician and director she could be. She immediately began teaching piano to a small group of students, and that number quickly grew until she opened her own studio out of her home in Costa Mesa, teaching children ages 3-18. At the peak of her career, Valdez was piano instructor to as many as 90 students a week—some she taught privately and some in groups.

“I wanted to direct, but after I stopped attending Bible College, I didn’t have any instruction,” said Valdez. “So, I would go anywhere Ralph would go and watch him direct. I always loved his tenacity—I learned so much from him.”

This year, Valdez made a generous donation to Vanguard University’s department of music in honor of Ralph Carmichael, the famous composer and arranger, known as the “father of Christian rock.”

At the age of 93, Valdez continues to operate a piano studio out of her home in Newport Beach, and has earned a reputation for her annual outdoor benefit concert where she gathers all eight of her grand pianos and has them moved down the hill on her half-acre property for a poolside concert. The springtime benefit concert includes pianos and the Four Seasons Youth Orchestra, and has earned the title Best Concert by the Music Teachers Association of California. A total of 48 benefit concerts have been performed under Valdez, with all of the proceeds going to special needs children.

“People ask me when I will retire. I say, after I take my last breath,” she says.  Her Cardiologist, Dr. Sarzan Rajput says that she will be teaching music until she is 100 years old.

During her illustrious career, Valdez has trained hundreds of piano students in the Suzuki method, directed countless Easter sunrise services, and choirs of up to 500 members. Many of these services were with the late Pastor Chuck Smith of Calvary Chapel and filled the Newport Harbor Stadium and Football Field with the attendance.  She eventually did finish her bachelor of arts in music, from California State University, Fullerton, at the age of 50, and also earned a masters’ certificate in Grossmuller Improvising.

Valdez’s love for music continues to grow out of her love for Vanguard. She attends Vanguard’s annual Christmas Fantasia concerts faithfully every year, and if her old friend Ralph Carmichael comes to Vanguard, she will go and see him. Valdez got her start at SCBC, made long-lasting connections and lifelong friendships, like the one with Carmichael.

“I love what Vanguard does, and I love music. I believe that if everyone studied music and went to church the world would be a better place.”