When Gianna “Gigi” Bryant first told her basketball star father that she wanted to play the sport, Kobe Bryant took her seriously.

“He kind of sat down with Gigi and said, ‘If you want to play, we’re going to do this,’ ” said Jeff Melton, assistant athletic director at Vanguard University. “’We’ll do this if this is a passion for you.’”

When she said yes, her father — who became legendary for his 20-year career with the Los Angeles Lakers — began tapping into his world of opportunities. He arranged for her to meet her basketball idol, Katie Lou Samuelson, a guard for the WNBA’s Chicago Sky. He took her to Atlanta Hawks NBA games to watch Trae Young, another of her favorite players.

Then he formed a club team at his Mamba Sports Academy in Ventura County. The group started with Gigi and a group of about 10 sixth-graders — several of whom were on their way to a game Sunday morning when the helicopter carrying them crashed in Calabasas. Bryant and 13-year-old Gigi; her teammate Alyssa Altobelli and Alyssa’s parents, John and Keri; assistant coach Christina Mauser; pilot Ara Zobayan; and mother and daughter Sarah and Payton Chester were killed.

It should have been just another game for the Mamba team, which had practiced recently — as it often did — at the Vanguard University gym in Costa Mesa.

A couple of years ago, Bryant reached out to Russ Davis, head coach of the women’s basketball team at the small Christian college.

“When he came into the room, he goes, ‘Russ Davis!’ And I’m like, ‘How did you know me?’ ” recalled Davis, who also coaches the Nike Cal Swish girls’ club team in Orange County. “He did his homework.”

Davis invited Bryant to bring his burgeoning Mamba team to practice at Vanguard’s gym, known around campus as “the Pit.” The location was convenient for Bryant, just 10 minutes from his home in Newport Beach.

Usually a couple of times a week, the team of young girls would take to the Pit’s courts to practice under Bryant’s watchful eye. Sometimes during the summer they would hit the courts twice in one day for morning and night practices.

The first time Davis watched Bryant coach the team, he was “in awe.”

“I’ve always known Kobe, watching him on TV, and just how intense he was, how driven he was and holding his teammates accountable and demanding the best out of everybody,” Davis said. “His team wasn’t playing particularly well, they were making a lot of silly mistakes. And he was just sitting there and he was encouraging them.”

Afterward, Davis said, Bryant approached him and asked for his thoughts.

“’I can’t believe how patient and calm you were,’” Davis recalled telling Bryant. “He just started laughing. And he goes, ‘Hey, you’ve got to teach them. They don’t know, they’re just learning the game. We just got to teach them; they’ll be all right.’”

Senior Sierra Vaglica, the Lions’ captain, wept Monday morning as she reflected on Bryant’s death. He was the first basketball player she ever fell in love with, she said. Her first pair of Nike shoes were Kobe VI. In her bedroom, she hung a plastic cutout of him dunking a basketball into a hoop that she had drawn on the wall.

So when Vaglica met Bryant as a college sophomore, she surprised herself by managing how starstruck she was. Bryant had come to teach the women’s team the triangle offensive strategy at one of its 6 a.m. practices.

“I was amazed at just how his brain works, just to see a little bit of how he functions and how he sees things,” Vaglica said. “It’s incredible.”

She offered to help Bryant by watching the gym doors during the Mamba team’s practice, making sure no prying eyes would disrupt the focus of Bryant or the girls.

Bryant kept the team’s drills simple: ball handling, passing, footwork, defensive close-outs. Sometimes he would spend up to 30 minutes just drilling the players on layups. He would watch and re-watch videos of the team in action, analyzing the girls’ technique and brimming with pride at their successes.

“He coached like he played: hard work,” said Jeff Bussell, Vanguard’s athletic director. “He pushed them hard and they worked hard.”

And the players improved. When Gigi and her friends first began practicing, they weren’t very good, Vaglica said.

“[But] just seeing how [Gigi] evolved over time, I could see a little bit of her dad in her, in the way she played, in the way she would pull off these crazy shots and everyone would be like, ‘Dang, how did you do that?’ But it’s like, ‘No, that’s Kobe Bryant’s daughter — come on.’ That’s in her blood. That’s who she is. She’s a Bryant, she’s supposed to do that.”

The more time Bryant and his daughter spent at the university, the more they became embedded in its tight-knit community.

Though basketball initially connected the two coaches, Davis said a deeper friendship began to blossom between him and Bryant. When Davis was diagnosed with throat cancer in April, Bryant “was there for me from day one,” checking in regularly and sending motivational text messages, Davis said.

Bryant visited him once at the Newport Beach assisted nursing facility where Davis was struggling to get out of bed.

“He basically called me out,” Davis said with a chuckle. “He said, ‘Are you going to sit there and feel sorry for yourself or are you going to fight back?’”

A nurse helped Davis walk around the hallway. Bryant coached Davis through the process.

A nurse helped Davis walk around the hallway. Bryant coached Davis through the process.

“I would just say that Kobe really, really tried to help a lot of people and be there for them in times of need,” Davis said. “He would go above and beyond … as far as being there for them or giving them a pat on their back.”

Christian College on Thursday, it will be Davis’ first game back since his recovery. Bryant had planned to be there to support his friend.

“I’m going to remember Kobe for his heart and his friendship first,” Davis said. “And then basketball somewhere down the road after that.” 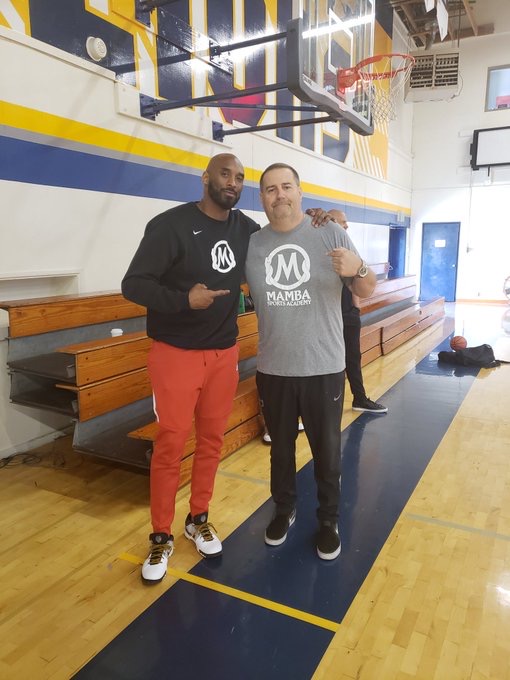