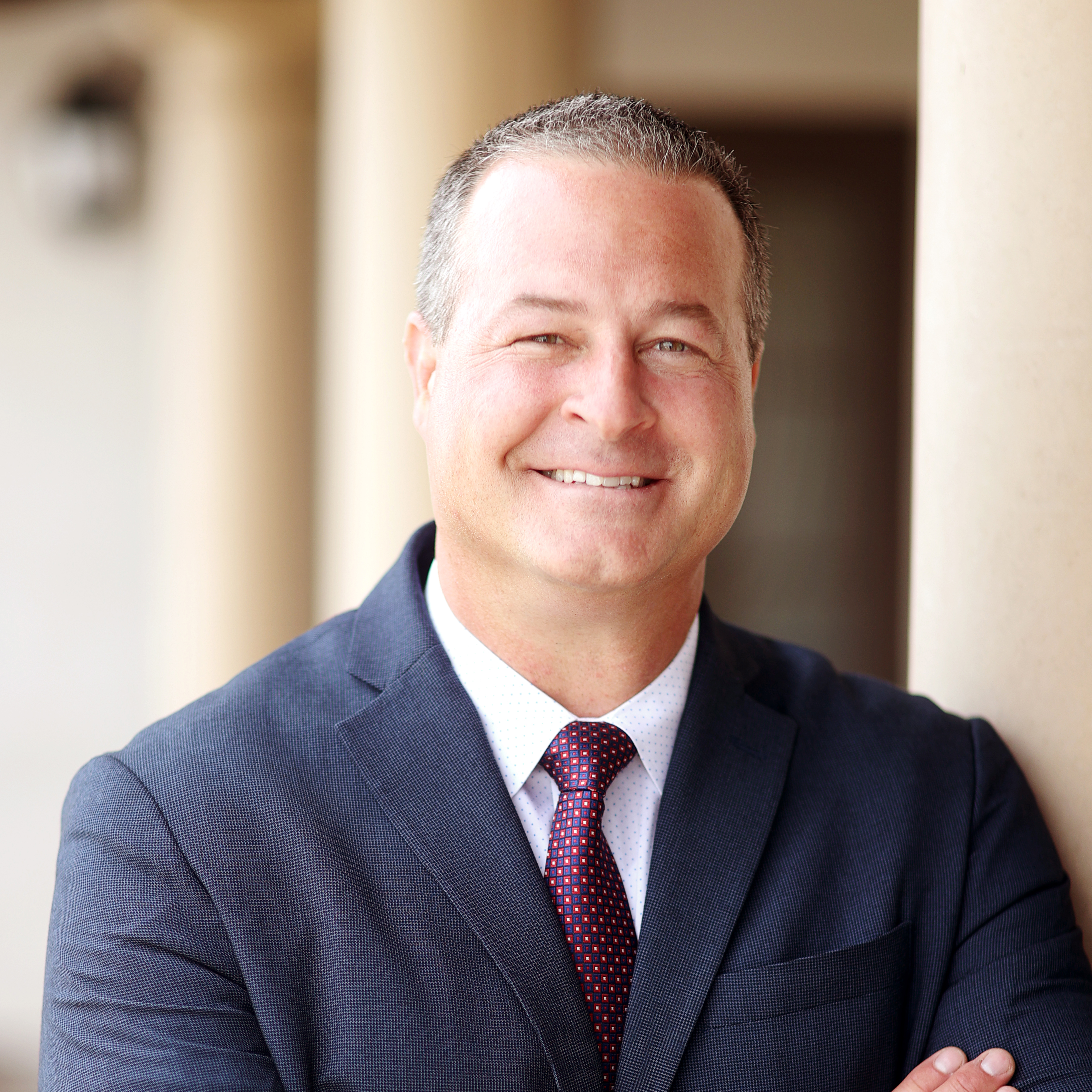 “I’m feeling a bit overwhelmed at the moment,” he said, before noticing the Vanguard University faculty and hundreds of students present were still on their feet after he was introduced.

“Oh yeah, you can sit down,” he added with a smile before going into his speech. “If I’ve learned anything over the years, it’s that God writes the best stories.”

The latest chapter for Hartwig was celebrated Thursday. He was installed as Vanguard’s new vice president of academic affairs and provost.

In his new role, Hartwig, 44, serves as the chief academic officer for the private Christian university. He will provide leadership for all faculty and academic services and programs, including the undergraduate college, graduate and professional studies, academic centers and institutes, the registrar and library. 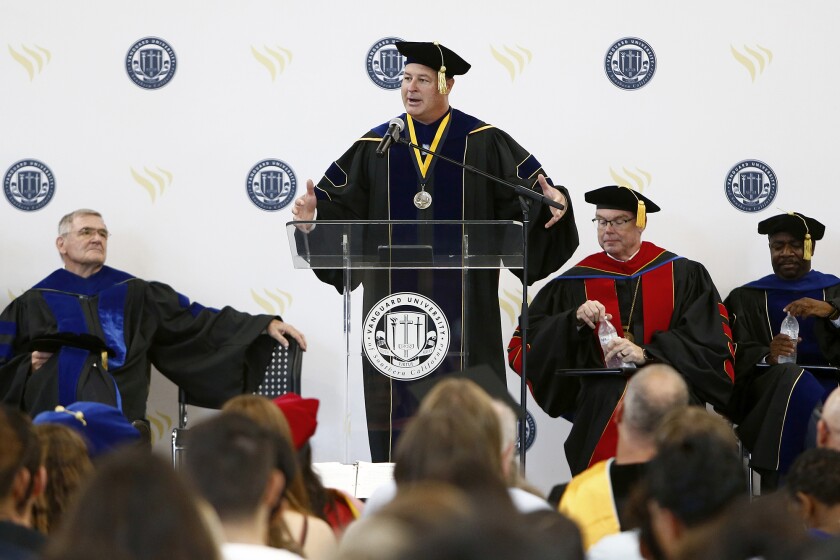 New Provost and Vice President of Academic Affairs, Ryan Hartwig, speaks during a ceremony on Thursday at Vanguard.

Hartwig, who began serving in his new position in June, was most recently the dean of the School of Humanities and Social Sciences at Colorado Christian University. He also worked an administrative role at Azusa Pacific University.

“There’s a real poising for growth as we move forward,” he said in an interview following the installation. “It’s kind of fun for me. It feels like my arrival and my appointment here kind of coincides with some really cool institutional momentum that’s happening right now, too.”

Vanguard has its largest incoming undergraduate class ever, with 650 new students roaming the halls. Vanguard senior director of external relations David Vazquez said that 53% of the incoming class is Latino, and first-generation college students comprise half the class.

Incoming freshman Adriana Martinez, who attended Thursday’s ceremony, is from Santa Ana. She went to Newport Christian School for high school and plans to study sociology at Vanguard.

Beals said it’s important to stay connected with the neighborhood in which Vanguard is situated. 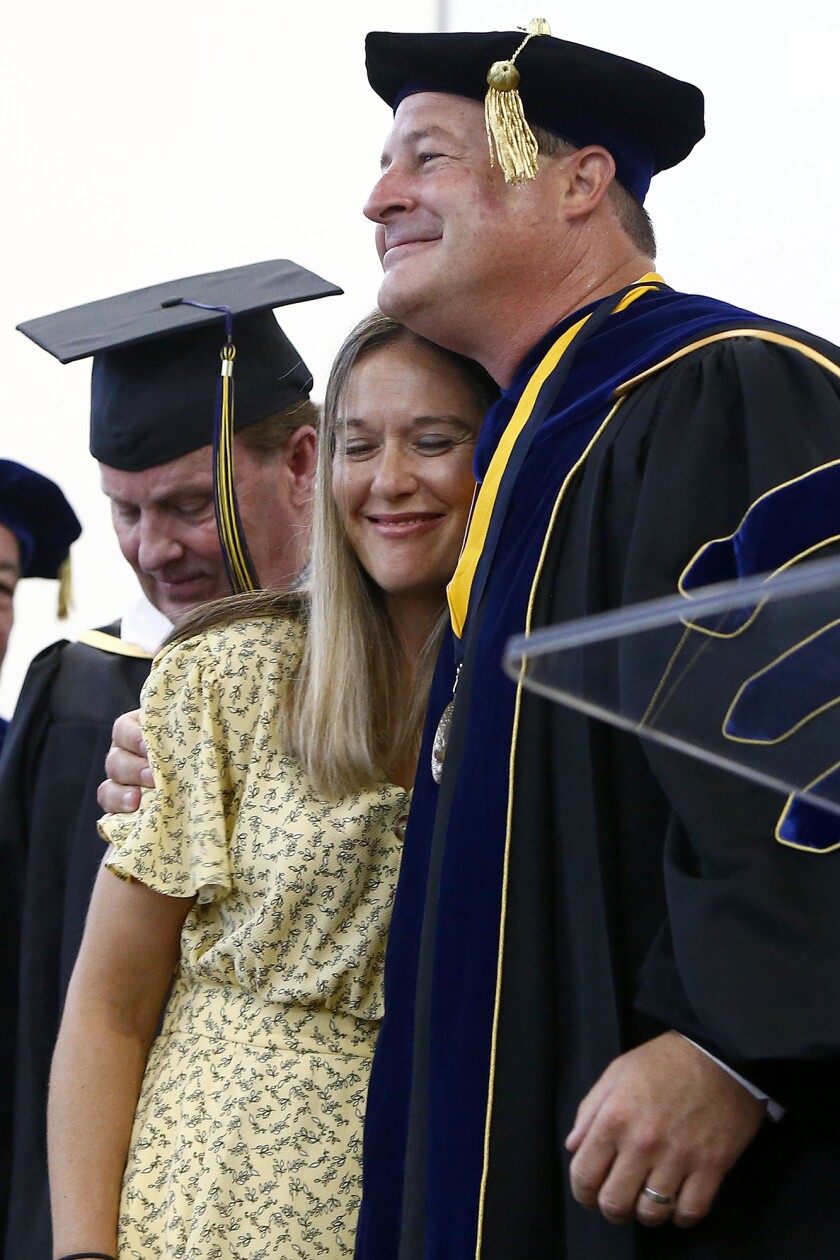 Ryan Hartwig shares a hug with his wife, Jill, as she joins him on stage after his speech during Thursday’s ceremony.

“We look at ourselves as educating our region,” he said. “We look to match the demographics of our region, and accessibly and affordability are critically important to us.”

Beals said the university underwent a nationwide search to find its new vice president of academic affairs. He was not on the search committee, though he did make the final decision on Hartwig, who is a married father of four children.

Vanguard, which held its first day of the 2022-23 school year on Monday, opened its Waugh Student Center in 2020 as part of its 30-year campus master plan. The Freed Center for Leadership and Service, which will feature athletic facilities as well as classrooms, is slated to open in 2024.

“When you’re 102 years old, it’s not a single fulcrum, right?” Beals said. “Every season of an institution that’s over 100 years old, you move into what’s next. I think Ryan really represents kind of the cusp of what’s next. You see that really in the growth of the campus, but it’s really our vision. Our formal vision statement is to be the leading source of Christian higher education in California.”