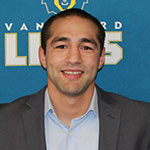 This is Caleb Flores, Vanguard University's newly appointed, Head Wrestling Coach. Flores started his education at the University of Northern Iowa where he was titled All-Conference and then qualified for the Western Wrestling Conference. He and his wife have four children.

As our athletic department continues to grow, Vanguard University has been grappling to re-establish a strong wrestling team and now we are in the process of recruiting for a new one. Currently, Flores has nine students committed to wrestle as a Lion. By October 2019, he plans to have a full team of 30 student-athletes ready to compete in NAIA.

Flores believes in building the team from the inside out and places Joshua 1:9 as the foundation of his leadership in building strong men who love the Lord. Vanguard welcomes Head Coach Caleb Flores and prays for a successful season.