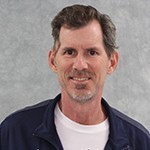 On Sunday, April 28, 2019, Vanguard University mourned the passing of our assistant basketball coach George Tuttle who was able to rest in His Father's arms after spending years of fighting cancer. He was known for his personality that matched the high and competitive spirit of his favorite sport, basketball.

Inspiring to many, Coach Tuttle was a family friend to head coach Rhett Soliday for eight seasons who he helped launch the Development Team in 2016. Tuttle had an illustrious career filled with family, friends and a supportive community that describe him as a man of living life with no excuses. Successfully, he was named twice academic all-conference and helped contribute to coaching the St. Edward's University Hilltoppers to second place in the Heart of Texas Conference.

Tuttle's work and spirit continue to live on with the players he has helped developed over his fruitful career as well as with his three children Connor, Grace, and Parker.